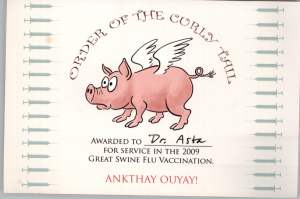 H1N1 influenza made its appearance a decade ago. From April 2009 to April 2010, there were over 60 million cases, a quarter million hospitalizations and 12,000 deaths in the United States. Through a coordinated public health effort, our office had vaccine to administer that fall.

We acknowledged our staff who worked hard to get the vaccine to patients.
Celebrate this milestone in public health readiness by scheduling your flu shot for this year.

Lisa M. Asta, M.D. is board-certified by the American Board of Pediatrics and is a Fellow of the American Academy of Pediatrics, for which she is also a Media Representative (she has been interviewed for “Kids Health” on Health Radio, and quoted in Parenting Magazine, USA Today, and the New York Times, among other publications). She is a Clinical Professor of Pediatrics at the University of California at San Francisco and past pediatric chair at John Muir Medical Center in Walnut Creek. She graduated from Temple University School of Medicine and the Johns Hopkins University. Dr. Asta is also a writer whose fiction has appeared in Inkwell, Philadelphia Stories, Schuylkill, and Zeniada. Her essays have appeared in the Journal of the American Medical Association, Hippocrates, the San Jose Mercury News, and The New Physician Magazine. She is an occasional contributor to KQED public radio’s Perspectives series, and has written articles for Bay Area Parent, Valley Parent, Parents’ Press, and Parents Express, as well as online at WebMD.com, Rx.com, and MyLifePath.com. She wrote a chapter in The Field Guide to the Normal Newborn, ed. Gary Emmet, M.D. BabyCenter.com currently has two how-to videos for parents in production which feature Dr. Asta. For more on Dr. Asta’s writing, visit www.LMAsta.com
View all posts by Lisa M. Asta, MD →
This entry was posted in Health Care, Immunization, influenza, influenza vaccine, Medicine, Pediatric Bits, Wellness and tagged Dr Lisa Asta, influenza, Lisa Asta, Lisa Asta MD, pediatrician, Pediatrician John Muir Medical Center, Pediatrician Walnut Creek, pediatrics, vaccination. Bookmark the permalink.